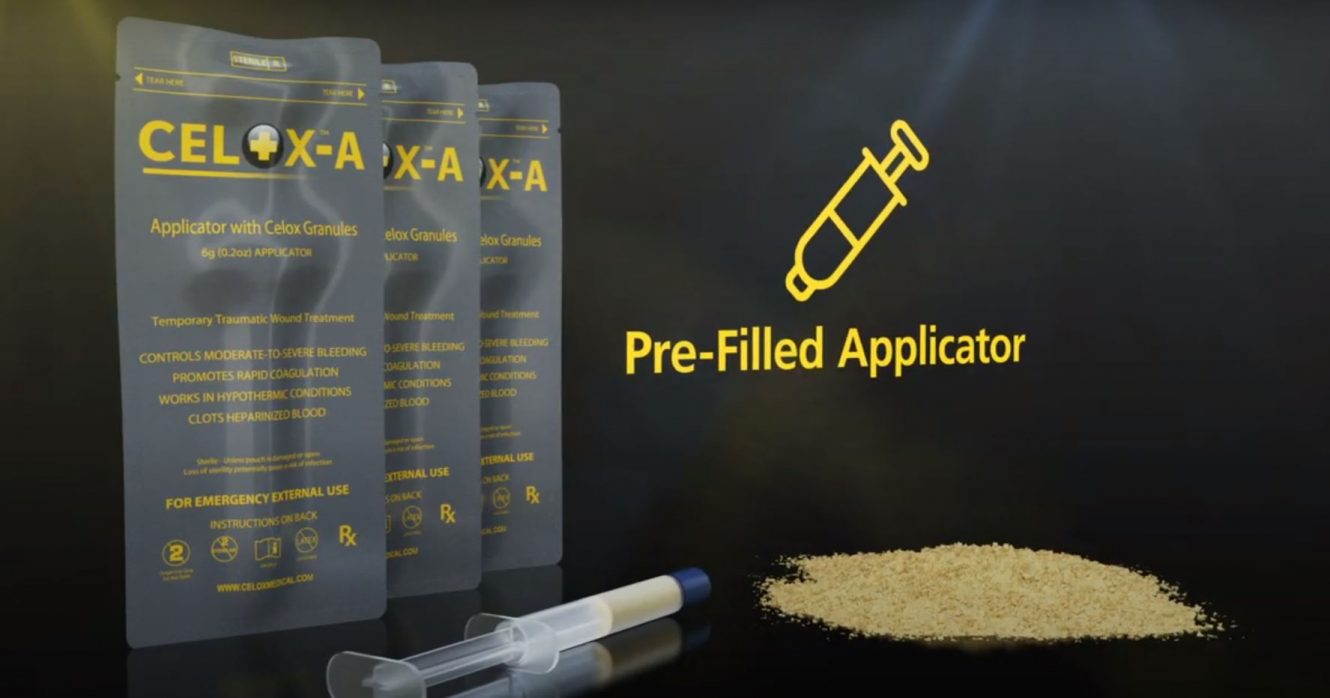 Introducing Celox-A a high-speed applicator delivery system pre-packed with Celox granules. That is designed to get directly to the source of bleeding in just a few seconds.

Uncontrolled hemorrhage remains the main cause of death for civilian adults under the age of 40. Stopping a moderate to severe bleed can challenge even experienced paramedics and emergency responders. Help is often too far away or the casualty bleeds to death before help arrives. In some situations, severe bleeding can lead to exsanguinationin under 5 minutes. Fast and effective treatment is needed to save lives.

Celox is proven to stop severe bleeding fast and is trusted by militarys, emergency services and health professionals the world over. Celox-A gets to the source of bleeding fast and treats hard to reach wounds. In an independent in-vivo trail when compared to other popular agents and standard gauzes Celox applicator gave the highest survival rate and a robust gel like clot.

Some hemostatic agents work by accelerating the body’s own clotting factors, but these can become compromised in severely bleeding casualties. Celox is different. It works independent to the bloods intrinsic clotting mechanisms. Celox works physically at the source of bleeding. The mechanism of action of Celox-A is through granule absorption of fluid in the blood swelling and sticking together to create a robust gel like clot that plugs the bleeding source. Celox-A is presented in 6g granules in a pre-filled applicator that has a 4-year shelf life and no allergies reported to date.

The following training video is a guide to using Celox-A to plunge granules into a wound according to the product indications and packaging instructions.

When responding to a casualty it is important to identify massive external hemorrhaging as soon as possible. Fully expose the wound.

Identify the point of bleeding and apply direct pressure to stem the flow and gain control of bleeding. Celox-A is indicated for moderate to severe bleeding. Familiarize yourself with the products packaging. It has a tear notch at the top corners.

While maintaining pressure on the wound, open the pack and remove the Celox-A plunger and barrel without touching the barrel’s tip. To prepare the applicator remove the clear plastic tab from the top of the barrel and insert the plunger.

As soon as the wound is filled cover and apply firm constant pressure for five minutes. Visually check for bleeding while still maintaining pressure if bleeding has not stopped re-apply pressure until bleeding stops. Wrap the wound using bandaging or a pressure dressing to secure and maintain pressure. Discard any remaining product. Maintain pressure at all times. Remember to bandage tightly to maintain direct pressure through to the hemostatic.

Celox-A is presented in 6g granules in a pre-filled applicator that has a 4-year shelf life and no allergies recorded to date. Celox-A is a unique applicator delivery system prepacked with Celox granules for moderate for severe bleeding.

Made to save lives.

I'm fine with this